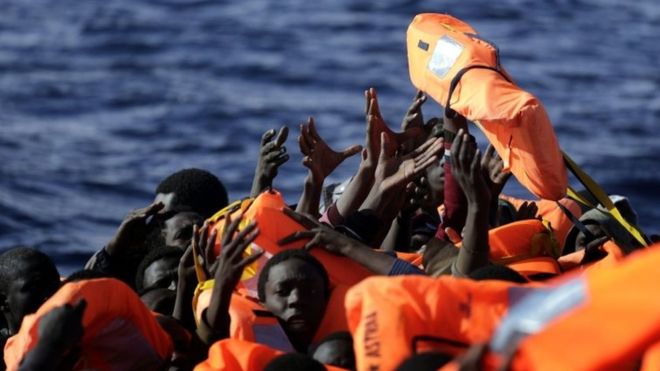 European Union leaders are meeting in Malta to discuss how to stem the influx of migrants from North Africa.

Boosting the Libyan coastguard and tackling people smugglers are the main proposals.

Hundreds of thousands of migrants try to reach Europe each year. Many of them drown while crossing the Mediterranean.

On Thursday, Italy’s coastguard said more than 1,750 migrants had been rescued in the Mediterranean within 24 hours.

Why are the migrants coming?

Most of those arriving in Libya come from a range of African countries, some fleeing persecution, many seeking a better life.

Migrants have fled Nigeria, for example, because of the instability in the north caused by the Islamist insurgent group Boko Haram. In Eritrea, many flee to escape military service which can last for decades and was compared in a UN report to slavery.

Since the fall of former leader Muammar Gaddafi in 2011, Libya has lacked any effective central government and security has been in the hands of various local factions.

A UN-brokered government, headed by PM Fayez al-Seraj, has only limited control over the country and people smugglers have found it easy to operate.

Libya, thanks to its proximity to Europe and instability, has become a centre for people trafficking from Africa.

Migrants who arrive from Libya tell of violence and trauma.

What is the EU proposing?

Most migrants were making their way into northern Europe from Syria via the Balkans, until an EU-Turkey deal to tackle the crisis came into effect last March.

This saw a significant reduction in the number of migrants using that route.

But the instability in Libya rules out a similar deal for migrants from Africa.

“There will be no bazooka,” an EU official told Reuters.

However, the EU is proposing bolstering the Libyan coastguard with training and equipment to help it prevent migrants crossing the Mediterranean on rickety boats.

It also wants tougher action against the smuggling gangs, the humanitarian repatriation of migrants who have had asylum requests refused, and improved conditions for migrants.

The EU already has a military presence in international waters off Libya to target people smugglers, and the idea is to increase support for this.

But experts warn that reliable partners in Libya are hard to find and that shutting existing routes might simply lead to the opening of new ones.

Italy, which now bears the brunt of the influx wants the whole EU to share the burden.

“If we want to give real strength and legs to managing migration flows, then there needs to be an economic commitment by the whole of the EU,” said Italian PM Paolo Gentiloni said after meeting Mr al-Seraj in Rome on Thursday.

The two signed a memorandum of understanding on increasing co-operation in prevent people trafficking.

EU Council President Donald Tusk, speaking before the meeting in Malta, said that breaking smuggling rings and stopping perilous sea journeys “is the only way to stop people dying in the desert and at sea, and this is also the only way to gain control over migration in Europe”.__BBC